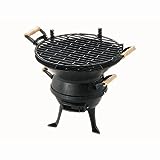 Landmann Cast Iron BBQ
Landmann's Cast Iron BBQ is probably your best option if you are in the market for a new hibachi grill. This grill comes with a decent sized cooking area of 36 cm diameter which gives you enough space to cook multiple pieces of meat at once. What's more, the grill is height adjustable meaning as well as altering the heat using the air vents you can alter how close your food is to the heat.</p> <p>This is also a very versatile hibachi grill as it can be used for anything from sausages, to fish, and even for grilling fruit! The whole of this product is made up of cast iron (except for the wooden handles) meaning that it has a very sturdy, good quality build.
Check Price 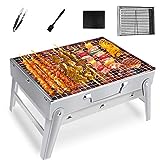 Gifort Barbecue Grill
If you’re looking for a good quality portable grill then this is a great option. Every set comes with a BBQ mat, grill clip, and a brush meaning it doesn't matter where you are, you will be able to set up your barbecue. The grill is also made up of heat and scratch-resistant stainless steel, this grill is made to last.</p> <p>Also well as being easy to transport, once you take it somewhere there isn't much more to do as you will be able to set it up in a matter of minutes!
Check Price 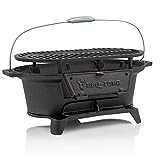 BBQ-Toro - Cast Iron Barbecue with Cooking Grate
One of the best features of BBQ-Toro's cast iron barbecue is the grate that can be flipped. Similar to the Cast Iron Landmann grill this means that you can change how close the food is to the heat source when you flip the grate it lowers the food, bringing it closer to the charcoal.</p> <p>Another really convenient feature of this grill is the shutter at the front of the barbecue. This shutter allows you to easily put more charcoal in without needing to remove the cooking grate. Finally, the handle attached means that this grill is easy to carry around with you.
Check Price

WSSZZ319 Japanese BBQ Grill Style for 2-4 People
This Japanese style grill really looks the part with the beautiful added details on the outside that make this grill much more aesthetically pleasing than most of the other grills on this list. However, it doesn't compromise on durability either as it still has a very high-end build quality that is very important as it means it is made to last.</p> <p>The grill also comes with a stand that elevates the main part of the frill from the ground. This helps to conserve heat as it prevents heat from being lost to the ground.
Check Price

What are Hibachi Grills?

The main idea behind a Hibachi grill is that it is portable, meaning they are always small and light (compared to other grills). Normally, hibachi grills will use charcoal, it’s a simple set up, the charcoal just needs to be hot and your food will cook!

Hibachi is Japanese for ‘fire bowl’, they can be alternatives to normal charcoal grills as they still give food that smokey taste, and they don’t take up as much space. Small food is what is traditionally cooked on hibachi grills as it is so close to the flame, to control the heat there are normally grills on the side of the bowl.

You most likely will not get a lid with your grill as old Japanese hibachi grills never used a lid. Another unique feature of hibachi grills is that sometimes they have multiple levels meaning you can have two different levels of heat either side of the grill.

What Food Can I Cook on a Hibachi Grill?

Hibachi grills are smaller than the average grill, this coupled with the fact that the food is so close to the charcoal means that thin meats are the best to use. Something like a small steak or chicken breast, seafood is also a great option. You aren’t limited to meat either as hibachi grills are great for cooking vegetables!

One thing to think about when cooking veg, however, is that smaller food could fall through the grate, dependent on how wide the gaps are.

Unlike smokers, hibachi grills cook food very quickly due to how close the flame is to the food. This is good for thin meat however thicker cuts won’t fully roast as there is no lid to trap heat. Another thing to note is that no smoke will be produced, therefore if you want to smoke salmon, for example, you won’t be able to do it on a hibachi grill.

Finally, obviously, being portable the grill surface area is smaller, so if you are feeding family or friends you might need more than one hibachi grill.

How Should I Chose my First Hibachi Grill?

Gas hibachi grills are better in terms of convenience, they are easier to get started and it is easier to control the temperature when using them.

However, the main issue with using gas is that you don’t get the amazing taste that you would get if you were to use charcoal. A drawback of charcoal is that it makes the grills much less portable as you will have to carry around charcoal with you, which is not ideal if you are camping.

In general, we say that if this is your first grill you might want to opt for gas as it will make the whole experience easier, also you might not even notice the difference in flavour. However, if you know what you’re doing and don’t mind lugging charcoal with you then go for charcoal for that charcoal flavour.

How Portable do you Need it?

If you’re purchasing a hibachi grill, chances are is that you need it to be portable. Make sure that the grill is in fact light because if it’s not you may as well purchase a regular grill.

Having handles is also very important because even if you have found a very light grill if it doesn’t have handles it probably still won’t be easy to carry around, which would defeat the point of purchasing a hibachi grill.

What’s the Best Material for a Hibachi Grill?

Material is vital when choosing a grill because it will be a big factor in how long it lasts as well as how well it cooks food.

Cast-iron grills are normally the best as they are very durable and can withstand heat and use with ease. They also produce better tasting food.

The positive of using an alternative such as aluminium is that it will be lighter than cast-iron and therefore more portable. However, aluminium won’t last as long and needs more care to prevent it rusting.

One final thing to think about is what material the handles are. In terms of safety, wood is the best, this is because it won’t conduct as much heat, therefore lessening the chance of burning your hands.

How Much Should I Spend?

Purchasing a cast-iron hibachi grill will set you back more than opting for cheaper material. However, even though they are more expensive cast-iron actually represents better value for money as they will last much longer and produce much higher quality food.

How Big Should the Grill be?

The surface area of the grill will determine how much food you can cook at once meaning this is important to look at.

If you are using a cast-iron grill you will want to season it, firstly you need to clean the surface. Start off by putting any food-safe oil on the grill surface. Make sure that there’s no salt in the oil, however.

Then, put your grill in the oven for an hour, after that let it cool. Congratulations, you have now seasoned you grill, easy right?

When using charcoal the first thing you want to do is put the coals into a charcoal chimney starter. Next, you need to put a few fire starter cubes or oil-soaked paper towels under the chimney filled with charcoal. Light the paper or cubes and wait 10 mins!

When the charcoal looks like its starting to ash over you can pour it into the hibachi grills. You can then arrange it however you want or set up different amounts of coal in different sections.

Put the grill back on top are you’re done, you can now start to cook!

Different grills will work in different ways but there are normally to main ways to adjust the temperature. Either there will be a vent that allows you to alter airflow or you will be able to adjust the height of the grill, moving the food closer to or further from the charcoal.

If you are using gas then all you need to do is insert some propane and use the ignite button.

As stated before, the best hibachi grill on the market is the Landmann Cast Iron BBQ.

The combination of a full cast-iron bowl and grill with wooden handles is perfect. What’s more, the fact that you can adjust the height of the grill makes temperature control easy. However, if you think that it isn’t for you any of the other grills on the list are also excellent choices!

How much Prime Rib should I serve per Person?

What are the Leanest Cuts of Steak?

What Internal Temperature should Pulled Pork be?

Adam is the creator of the SmokeGuys website, running it since 2016. Hater of coriander, lover of all things meat... Adam currently works in marketing with a dream of being able to make food his full-time 'job' in the longer term.